Vita et Caritas Award (For Life and Love Award) is given in honor of Ruthie Ford, whose life reflected Catholic ideals and tireless dedication to service in the cause of helping women, children and families.

Ruthie Ford was a humble, selfless servant of the Lord. She was a gentle person with a deep inner strength. Guided by the principle that life was a gift from God and therefore every life was worthwhile, she took her Catholic beliefs and then turned them into social action.

Ruthie worked tirelessly for women and children, particularly the unborn. She worked for the Church and for the community’s non-profit institutions that offered them support. She had a contagious passion and was a natural leader who inspired others to bring the hope and love of Christ into the hearts of the needy.

Ruthie co-founded two non-profit organizations in support of women and their unborn children. She also identified, recruited and trained community leaders to become members of the Boards of Directors. Ruthie also created numerous fundraising programs to ensure the financial vitality of the various non-profit groups she nurtured.

Ruthie set up numerous volunteer groups to support her endeavors and served as a role model for the many who worked with her. She knew that volunteers are the lifeblood of non-profit organizations. She was convinced that the contribution of a single volunteer, no matter how big or how small, is truly invaluable. Every volunteer is capable of making a significant difference in the lives of others.

Ruthie was a Regional Director for Birthright International and for over 25 years saw to the expansion of their counseling centers for women with unplanned pregnancies.

Perhaps Ruthie’s greatest achievement was in 1987 co-founding New Generation, a shelter for homeless pregnant women in Greenland. New Generation has served over 425 women and supported them as over 275 babies were born.

Ruthie served on the Board of Directors and was an officer of the Bishop’s Charitable Assistance Fund from its founding up to her death. She also was a member of the Board of Directors of Catholic Charities of New Hampshire and served as the Annual Campaign Co-chair in 2004. Recognizing her significant and enduring contributions to humanity, St. Thomas Aquinas High School named her the 2012 Recipient of the Lux in Tebebris Award. She and her husband were members of the Equestrian Order of the Holy Sepulchre of Jerusalem.

After Ruthie’s death in 2012, her family worked with the Bishop of Manchester to establish the Vita et Caritas Award (For Life and Love). Since Ruthie and her husband, Pat Ford, were among the first supporters of what today is the Bishop’s Charitable Assistance Fund, the family asked to have the annual award be given as part of the Bishop’s Summer Reception, which marks the end of the annual campaign to raise funds to support organizations that provide for basic needs. 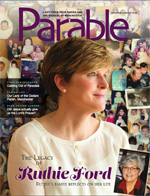 Cabinet Secretary for Development and Communications