Home » About » Who We Are » Bishop » Episcopal Coat of Arms 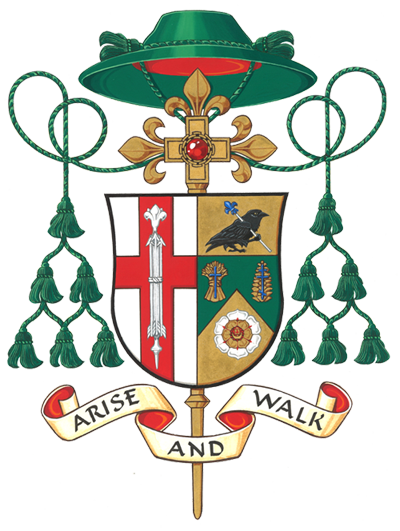 The Armorial Achievement of The Most Reverend Peter Libasci, Residential Bishop of Manchester in New Hampshire, ordained both a Presbyter and Auxiliary Bishop of Rockville.

The arms incorporate the bishop’s rich bi-ritual ecclesiastical heritage in both the Latin and Ruthenian Rites of the Catholic Church. As such, it likewise incorporates a special tribute to both his maternal and paternal ancestry and heritage and tribute to the Order of Saint Benedict, which was responsible for the Bishop’s seminary training. Additionally, when Bishop Libasci’s coat of arms was first designed when he was named a Chaplain of His Holiness, he strongly desired a special means of honoring Blessed John Paul II, who reigned as pope throughout much of the bishop’s priesthood and who elevated him to the monsignorial dignity and Papal Chapel. 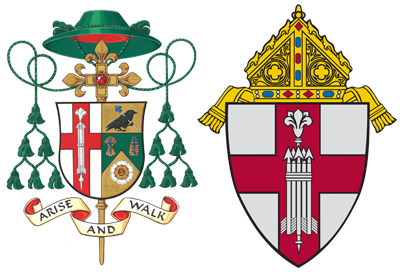 The design of the armorial achievement of Bishop Libasci, incorporating all of these elements, also has now been impaled with the arms of his new diocese in the same fashion as a man and woman who have individual arms marshal them together. This impalement in the church illustrates the union of a new bishop to his faithful in the same way a man marries a woman who becomes his wife, the two joined spiritually together. As such, Bishop Libasci’s coat of arms shall therefore be described in the following manner:

The base of the bishop’s side of the shield has been rendered in green representing both Christian charity and the rejuvenation of one's soul through good works. Green is also the color of everlasting life and of the ordinary time in the Church (thereupon a secondary color of priesthood). 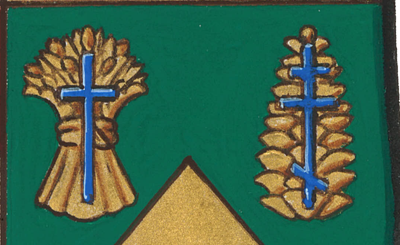 Upon this field appear two charges or emblems. In the dexter (or left side as one views this portion of the shield) there appears a garb or bundle of wheat, rendered in gold. Bishop Libasci's paternal ancestry is deeply rooted in Sicily where his great-grandfather made his living as a wheat merchant. This wheat garb stands for the Bishop's Sicilian roots. Wheat also represents the Eucharist and the role of the priest in sacred liturgies and for a bishop of the Church, the fullness of Holy Orders. Upon this garb is found a Latin Cross representing Peter Libasci's Latin Rite heritage. It has been rendered in blue in honor of the Blessed Virgin Mary.

Opposite his Sicilian heritage and Latin Rite standing is found (in the sinister side of his portion of the shield) a pinecone rendered in gold. This charge or emblem represents the Slovakian, maternal heritage of the bishop. Initially, Bishop Libasci desired a Pinus Cembra, a species of pine tree indigenous to the Tatra Mountains of his ancestral homeland and known as the Queen of the Tatras, and later he thought perhaps the Pinus Nigra genus would do just as well (as it is also known as the Austrian Black Pine and his ancestral home was long a part of the Austro-Hungarian Empire), but as inclusion of either type of pine tree in its true form would not present the balance that ecclesial heraldry requires, the cone from the Cembra species of fir tree was finally selected by the bishop to mark his desired symbolism. Upon this pinecone is charged the Eastern Rite, or Byzantine, Cross, also rendered in blue representing once more honor to the Blessed Virgin Mary. The Byzantine Cross also marked the bishop’s simultaneous standing in the Ruthenian Rite of the Roman Catholic Church.

The bottom of the bishop’s portion of the new coat of arms has been reserved for special reverence and honor to Blessed John Paul II. Here on a field of gold appears a special emblem designed by the Blessed John Paul II specifically designed by heraldic designer, James-Charles Noonan, Jr in honor of the life, vocation and death of this great pope of happy memory (reigning as pope: 1978- 2005). This emblem is known as THE APOSTOLIC ROSE and also honors the office of the Papacy and all those who came to it including Benedict XVI, Gloriously Reigning. 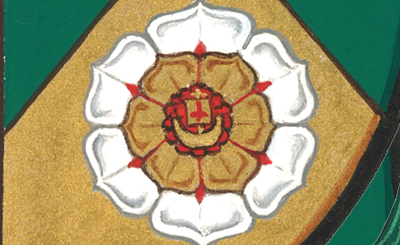 The Apostolic Rose consists of twelve petals, alternating gold and silver, the colors of the Petrine Office and the Holy See. The number twelve represents the Twelve Apostles, the select of Christ, actually honoring the original eleven and the one chosen to replace Judas Iscariot. Six external petals are worked in silver representing light and truth and represent 'the Truths' (dogma) as taught by the Magisterium of the Church. The six internal petals are worked in gold, representing the sacred and the divine; and the sacred office entrusted to the popes as 'Vicar of Christ'.

Golden yellow is also the color specifically associated with Saint Peter. He has always been depicted wearing a mantle of gold cloth representing the majesty of the Petrine Office, which bears his name. In place of the standard bud of the heraldic rose, in the Apostolic Rose is found a field of sanguine, or blood red, on which appears the Bark of Saint Peter, a tossed and turned galley of the First Century with one mast and sail representing the journey taken by the first pope from the Holy Land to Rome to establish the See of Rome and which further represents the ministerial outreach across the globe of all modern popes, particularly Blessed John Paul II.

Upon this sail is charged the Petrine Cross, an upside down Latin Cross worked in red. Red represents the blood of Peter's martyrdom and the upside down cross his chosen means of crucifixion. Emanating from the Bark and in between each petal are veins of the sanguine representing the physical martyrdom of so many of the popes of the first centuries of Christianity. Each vein likewise represents the spiritual and personal sacrifice of every pontiff since. Created by James-Charles Noonan, Jr. in the months following the late pope's death, Bishop Peter Libasci was the first person to ever bear this new heraldic image in honor of Blessed John Paul II and the Petrine Office when he first assumed a coat of arms as a Chaplain of His Holiness. 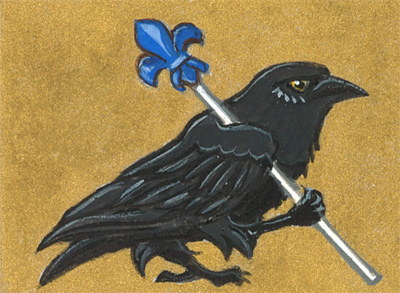 At the top of the bishops armorial achievement, specifically on his personal side of the design, in the field known heraldically as "the chief," appears a gold field on which stands a black raven. The raven represents the Abbey of Santa Maria in Einsiendeln, the great baroque Benedictine abbey church in Switzerland that holds profound spiritual import for Peter Libasci who was trained by the Benedictine Fathers at the daughter house of Saint Meinrad Abbey in the Mid-Western United States. The Einsiendeln arms incorporates two ravens in flight and bears the image of the Blessed Virgin and the Child Jesus. Taking inspiration from this ancient design, the armorial achievement of Bishop Libasci symbolically incorporates these elements by placing the raven ‘in chief’ in his arms. The raven represents the abbey and the Benedictine Fathers. In its talon, or claw, appears the silver staff of a queen, in this case the Queen of Heaven, and at its tip, a blue Fleur de Lys, the emblem of the Blessed Virgin Mary.

The bishop’s new design is impaled with that of the Diocese of Manchester in New Hampshire which he shall govern henceforth.

In heraldry, a motto has been both a personal philosophy of life as well as a family dictum, and sometimes even a cry for battle. But in Church heraldry, a cleric's personal motto has always been intended to represent his personal spirituality and theologically based philosophy of life and is most frequently grounded in Sacred Scripture or in a prominent prayer or litany. For Peter Libasci, this symbolism is found in the simple words:

Arise and Walk
Bishop Libasci chose a motto that is both scripturally based and which further honors his maternal ancestry as it has been translated into the Slovak language. The words "I have neither silver nor gold but what I have I give you" can be found in the Acts of the Apostles (3:1-10):"Now Peter and John went up into the temple at the ninth hour of prayer. And a certain man who was lame from his mother's womb was carried: whom they laid everyday at the gate of the temple, which is called beautiful, that he might ask alms of those that went into the temple. He, when he had seen Peter and John, about to enter the temple, asked to receive alms. But Peter with John fixing his eyes upon him said: 'Look upon us.' But he gazed deeply upon them, hoping that he would receive something from them. But Peter said---'I have neither silver nor gold but what I have I give you in the name of Jesus of Nazareth – Arise and Walk.'

There are external elements to every coat of arms design that must also be explained. This is also so in ecclesial heraldry. Surmounting the Presbyteral shield of a Residential Bishop is the pilgrim's hat, the heraldic emblem for all prelates and priests of the Latin Rite of the Roman Catholic Church. For the rank of bishop, titular and residential, the pilgrim's hat is always worked in deep forest green. 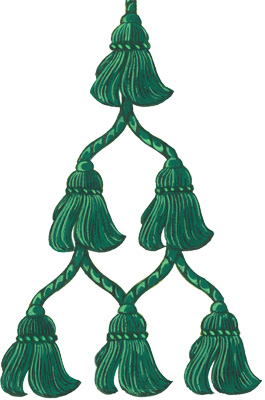 For this rank and office in the episcopacy there are six tassels suspended on either side of the hat in a pyramidal style. The hat is properly known as the galero and the tassels take the name fiocchi. These cords (cordiere) and tassels are worked in the same hue of green and the interior of the hat is always rendered in red, and has been so for eleven centuries. 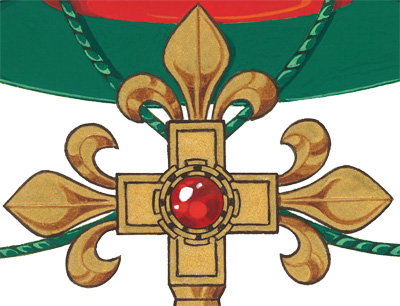 Behind Bishop Libasci’s coat of arms is found the episcopal cross. For the bishops, this cross has only one transverse arm. The cross may be jeweled or depicted as plain and most resembles the processional cross commonly used in liturgies. The episcopal cross found behind and above this coat of arms is worked in gold, and has three Fleur de Lys emblems emanating from it. This is known in heraldry as the Cross Fluerity. This was chosen to tie together the personal arms of the bishop and that of the Diocese of Manchester which has at the head of the queue of arrows a Fleur de Lys. This form of cross is also another symbol for the BVM and also honors the French Catholic population that long ago settled in the region. The blood red stone is representative of martyrdom and the chain that surrounds it represents the arrest and imprisonment of the first pope, Saint Peter, who is the bishop’s patron saint.

Overall, Bishop Libasci’s episcopal coat of arms has remained faithful to the style of Church heraldry originally developed in the Middle Ages. It is this ancient style that the Church continues to demand in the seals of office of each diocesan bishop, and of the co-adjutors and the titular bishops as well, whose seals traditionally derive from the design of the personal coat of arms.

Who We Are
Get Involved
Stay Informed