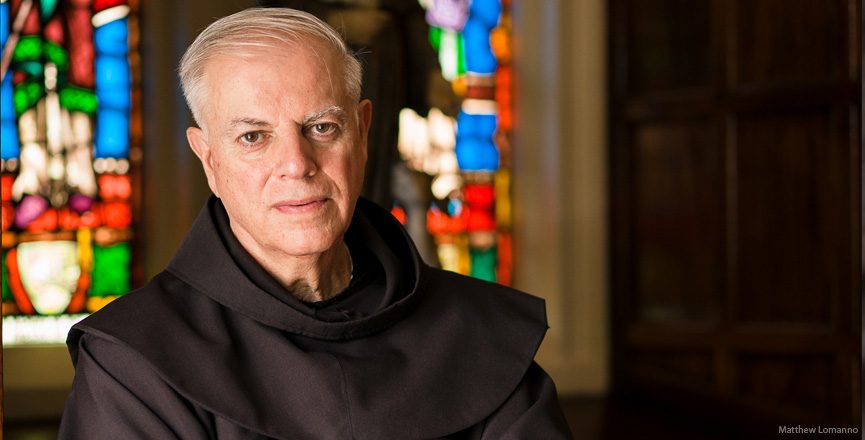 It’s customary for some of the English as a Second Language (ESL) students at Blessed Sacrament Church in Manchester to spend a few minutes of class time playing traditional music. They were surprised one night, however, when a tall, smiling priest hopped into their midst and started dancing. “They couldn’t believe I was the priest,” recalls Father John Bucchino, O.F.M., pastor of the 800-family church. “But I enjoy life.”

That optimistic attitude has imbued every step of the life Father John has led, bringing a smile to those he greets at the church food pantry or the youth group or in the classes he teaches. Father John is a man at peace, constantly striving to spread his love and wisdom, and to renew the faith of those around him.

Father John, 69, began his journey in the Church at an early age. Born into an Italian family in the North End of Boston, he grew up surrounded by the Franciscan brothers who served the tight-knit community. “My mother was a great Italian cook,” he says. “The Franciscans would come over to eat, and I began to get this really wide view of life and God. They’d tell these stories, and it caught my fancy.”

Father John, in his customary brown, belted habit, belongs to the Order of Friars Minor. The order is a branch of the Franciscans, a brotherhood that has followed in the footsteps of Saint Francis of Assisi since 1209. Their values of prayer, poverty, service, and brotherhood, coupled with a powerful calling to help his fellow man, have shaped Father John’s consecrated religious life.

In 1968, he completed his combined undergraduate work in philosophy and his postulancy at the Immaculate Conception College in Troy, New York, after which time he became a novice at Saint Anthony Friary in Catskill, and then moved to finish his seminary work at the now-defunct Saint Anthony-on-Hudson. He received his masters of divinity five years later from Boston Theological Institute, and was ordained in 1973. After briefly returning to a North End parish and then a period of teaching philosophy, he soon made the decision to get his doctoral degree in pastoral counseling and clinical pastoral education at Andover-Newton School of Theology in Massachusetts. It was there that he discovered his passion for helping those facing crippling mental illness.

“I was chaplain at Westborough State Hospital,” remembers Father John, who later became certified as a clinical educator for the Association for Clinical Pastoral Education and the National Association of Catholic Chaplains. “I always said I did my best work with the mentally ill. I’m still involved, teaching seminarians communication skills and how to walk with people at difficult times in their lives, how to minister, and how to turn to God. I think there’s such a great need.”

But pastoral and family responsibilities soon brought him to New Hampshire. Father John needed to come home to help his sister care for their parents, and Blessed Sacrament had an opening for an assistant pastor. He has been pastor for three years, a move that required this intellectual Franciscan to learn the unique rhythm of parish life.“I had to become more patient,” he says with a smile. “I see the people here – the love for their parish is so strong. This is their home away from home. We are not a wealthy parish, and for me the major attraction here is the work I can do with the poor.”

He finds strength and comfort in his intimate relationship with God, which Father John passes along to those he serves, whether he’s helping sort clothes in the church’s secondhand clothing program, presiding over the interfaith Greater Manchester Clergy Association, visiting his Franciscan brothers, cooking a homemade Italian dinner, or even dancing at an ESL class.

“It’s a challenge, balancing realism with optimism,” he says. “Where’s God leading us? But the very simple things are gifts. I really praise God for the goodness of life that is abundantly given to us, to me. Everything is an opportunity to bring joy. And I think the world needs it.”