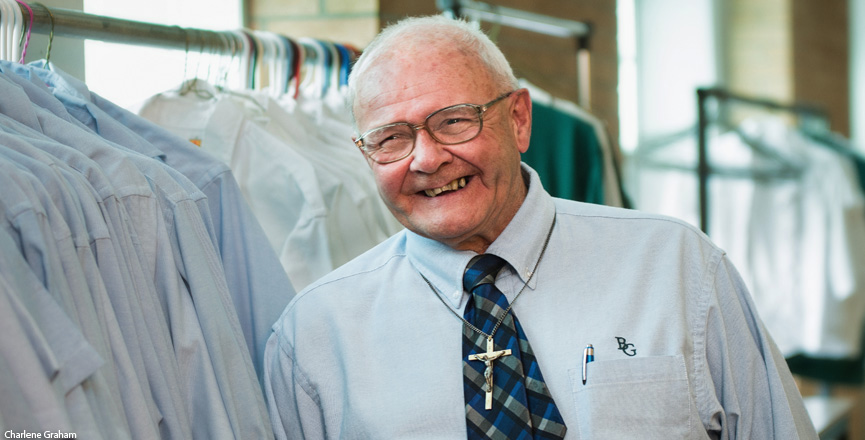 As Brother Normand Roux, S.C., makes his way around the chairs and book stacks in the library at Bishop Guertin High School in Nashua, teachers, administrators, and staff wave hello and call friendly greetings to him as he walks past – there is a sense of celebrity about this smiling, energetic man.

“Hey,” he calls to a girl poring over a textbook at one of the library tables. “I saw you score a goal the other day at the soccer game. It was your first, wasn’t it?”

To another girl he jokes that he’ll need his calculator back after she’s done with it. A large group of students comes by and together they throw their arms around Brother Normand’s shoulders. It is clear that this man is well loved in these halls.

“I like to be near the action, near the students and the school,” says Brother Normand. He is one of seven Brothers of the Sacred Heart who live and work at the school. They live in the residence adjoining the classrooms, making their meals in the kitchen that bears the sign, “Caution: Men Cooking.”

Laughter, love, and prayer make up a large part of Brother Normand’s life. Born in 1934, he was raised in a Catholic family and attended Catholic schools with the Brothers of the Sacred Heart, an order founded in France in 1821 by Father Andre Coindre. Father Andre envisioned a community of brothers living together and working with the poor through the establishment of schools. They would take vows of chastity, poverty, and obedience, but not be ordained. Brother Normand, an athlete throughout school, was influenced by his teachers and knew that a consecrated life was for him. “Throughout high school I felt the calling. A lot of people feel it’s something miraculous, and it isn’t. I knew I wanted to teach and coach, and I made my first vows right after high school at the age of 17,” he says.

Following in the footsteps of his order’s founder, Brother Normand launched right into teaching after attending college in Alabama. He taught science, math, and chemistry to all ages, eventually traveling to England to teach and coach basketball at Saint Columba College. “We won the championship,” he remembers. “I trained boys to play basketball who never had seen a basketball before. The contact with students outside the classroom is so important to us.”

His enthusiasm for sports followed him to Bishop Guertin in 1991, where he taught and coached until retiring in 2004. After open-heart surgery four years ago he jokes he’s a bionic man. These days, Brother Normand helps out in the school library, tutors freshmen in math, and is a fixture on the sidelines of any sporting event.

“We have a very good community,” he says. “The brothers are very happy people. I love the support I get from them and from prayers.” Not surprisingly, Brother Normand views his relationship with God as a friendly one. “I’m very open with him,” he says. “My private prayer is at least an hour to an hour and a half every morning. I get up very early, around 3:30 in the morning, to pray. I love to read spiritual books. And watch the Bruins!”

Recently the students sent letters to the brothers thanking them for their service and guidance. The sentiments expressed in the cards affirm Brother Normand’s choice all those years ago to become a Brother of the Sacred Heart. “There were 900 letters, and I read them for five straight hours,” he says. “This charism is based on understanding God’s love for us and sharing it with other people. We’re very happy, and we care for them.”