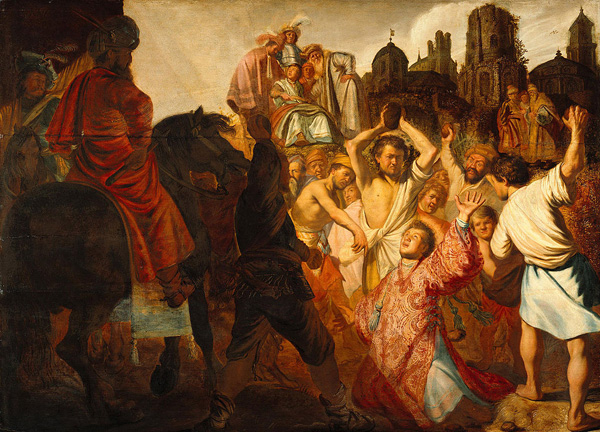 Growing up, I had very little understanding or experience of the Christian religion, in any of its forms. In the sixties and seventies it was easy to fall through the cracks and not to be touched by any of the churches or their activities. It was a time when many kept their religious practices quiet, and when it seemed normal to be an unbeliever.

So I read science fiction, escapist short stories, and the daily comics. I knew there was a Bible, but starting either in Genesis or in Matthew gave me trouble. Too many genealogies.

I happened across a book by James Michener in my teen years, The Source. By mingling a modern novelistic story with historical flashbacks—flashbacks of thousands of years, then hundreds, then decades—Michener made it seem that the drama of our individual lives is an upswelling of desires, confusions, and hopes passed down from long-forgotten ancestors. By neatly balancing a Catholic, a Jew, and a Muslim among the archeologists, and showing how secular motives explained some of the most significant events of religious history, Michener gave the impression that religion was a personal choice, with agnosticism the most rational of choices.

But by vividly describing what the Jewish people had endured because of their grip on their God, Michener gives a taste of something stronger than personal drama, historical explanation, or novelistic intensity. More than one faithful Jew had died with the words of the ancestral prayer on his or her lips: “Hear, O Israel, the Lord our God, the Lord is One.” Whether he intended it or not, Michener had awakened in me a desire to know whether God exists, whether He is accessible, whether our loyalty matters to Him.

These are some of my own personal reasons for thinking often of Stephen the Deacon and the description of his service to mankind in the first few chapters of Acts. The book of Acts is about the Apostles—its full name is The Acts of the Apostles—and the deacons are a kind of side story. (A lot of life takes place on the side, I think; it has surely been so in my life.) Stephen lingers in the memory even after reading of the more familiar work of Peter and Paul which makes up the bulk of the book.

Stephen was one of the original seven deacons, chosen by the people when the Apostles realized that a division of responsibilities was necessary for the Church. The Apostles would pray and preach the Word; the deacons would take care of such practical needs as might otherwise be distracting to the Apostles.

But Stephen was also on fire with the Word. He had understood how the coming of the Messiah shed light on the whole history of the people of God and their suffering, and wanted as many people as possible to see what he had seen, and found beautiful. In the seventh chapter of Acts, Stephen becomes more of a preacher of the Word than the Apostles. He antagonizes those who have trouble with the implications of his message—that they must repent and change the direction of their lives now that the Messiah is here—and ends up being stoned for his insistence on the truth of the Word, seeing heaven opened and looking into the face of his Messiah in his dying moments.

I want to be like Stephen. Like him, I know that the Messiah has come. Like him, I want to share what I’ve seen and give as many people as possible the opportunity to try serving Jesus the Messiah, who gives joy even in suffering. Not believing in anything or anyone eternal once seemed normal. Stephen has helped me to see that everything that happens on this earth is a reminder that God is at hand.