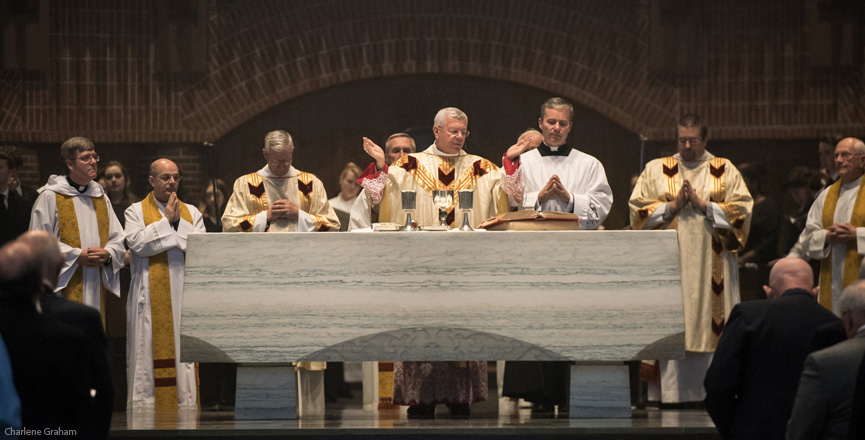 Home » Worship/Sacraments » Our Faith » Worship » Order of the Mass

Order of the Mass

The Mass, or celebration of the Eucharist, is the principal liturgical action in the Roman Catholic Church. The word “Mass” comes from the Latin word, missa meaning “mission” or “sending” because the liturgy is to send forth the faithful to bring forth the Good News of Jesus and to be His sacramental presence in the world.

The Mass was established by the Lord Jesus at the Last Supper on the night before He died for us. In this celebration, we participate in the mystery of salvation by remembering the sacrificial death and resurrection of the Lord.

The Liturgy of the Word is the first major component of the Mass during which selections from the Scriptures are proclaimed. A teaching, known as the “homily” is given using the Scriptures of the day to explain the Christian life to the faithful. On Sundays and major feasts of the Church, the faithful profess their faith using the formula known as the “Nicene Creed.” In certain instances, the Apostles’ Creed may be used in its place. The Liturgy of the Word concludes with the Prayer of the Faithful during which the people exercise their royal priesthood by interceding for the needs of the whole world.

The Liturgy of the Eucharist forms the second major part of the Mass. It begins with several minor preparatory rites and culminates with the Eucharistic Prayer. During this prayer, the priest invokes the action of the Holy Spirit (epiclesis) to change the bread and wine into the Body and Blood of Christ. After several more minor rites, members of the assembly who are Roman Catholic and not in the state of serious sin, are invited to receive the Body and Blood of the Lord. 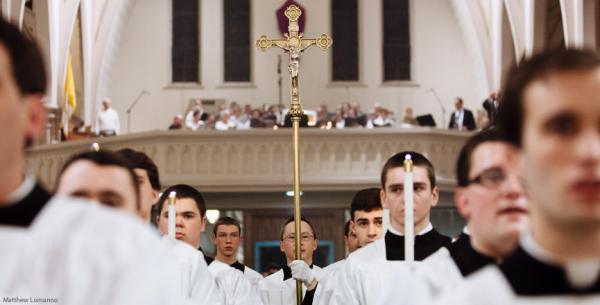 Structure of the Mass

Veneration of the Altar

Glory to God (on all Sundays except during Advent and Lent; on solemnities and major feast days during the week)

Liturgy of the Word

First Reading (on Sundays and solemnities, generally from the Old Testament; during the Easter Season, from the Acts of the Apostles; on feasts of the Blessed Virgin Mary, may be from the Book of Revelation)

Second Reading (only on Sundays, solemnities and special feast days; always from the epistles)

Gospel (taken from one of the four Gospels)

Profession of Faith (recited or sung on all Sundays and solemnities)

General Intercessions or Prayer of the Faithful

Prayer over the Gifts

Breaking of the Bread

Invitation to the Eucharist

Announcements (if there are any)
Final Blessing and Dismissal

Read more information on the Order of the Mass