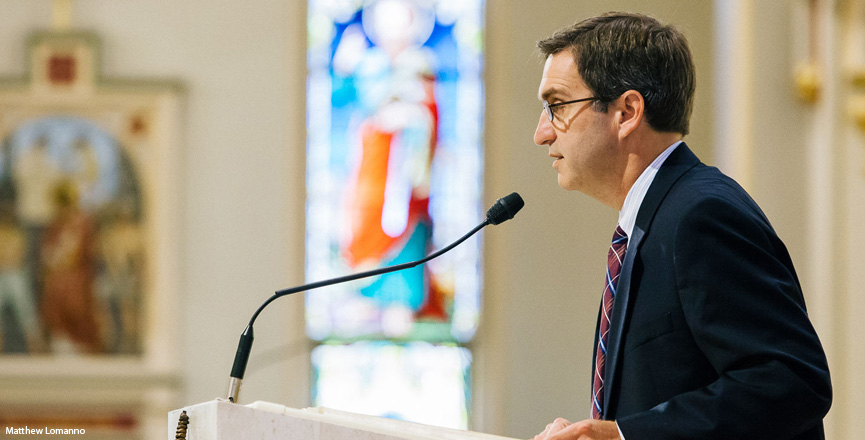 The Ministry of the Lector

In liturgical celebrations each one, minister or layperson, who has an office to perform, should do all of, but only, those parts which pertain to that office by the nature of the rite and the principles of liturgy.

Servers, readers, commentators, and members of the choir also exercise a genuine liturgical function. They ought to discharge their office, therefore, with the sincere devotion and decorum demanded by so exalted a ministry and rightly expected of them by God’s people.

Constitution on the Sacred Liturgy, nos. 28-29

References for Readers in the General Roman Missal 2000

Excerpts from An English Language Study Translation of the Institutio Generalis Missalis Romani Prepared by the NCCB Secretariat for the Liturgy, ©2000. All rights reserved.

Readers enter in the procession and take places in the sanctuary (at least for the liturgy of the word).

The deacon (or in his absence, a reader) carries the Book of Gospels if used. The Lectionary is never carried in procession.

Readers and other ministers precede the deacon and priest and make a deep bow to the altar before going to their places.

The bow is made to the altar which represents Christ – not the cross.

If the tabernacle is in the sanctuary, the ministers first genuflect to the Blessed Sacrament. Another genuflection will occur at the end of Mass. During the Mass those who pass before the tabernacle do not make any signs of reverence toward it.

Ministers who carry liturgical objects make a simple bow of the head instead of either the genuflection or the deep bow.

The deacon, or reader, who carries the Book of Gospels omits the usual reverence, places the book on the altar and then makes reverence to the altar. (The reader makes a deep bow; the deacon kisses the altar along with the priest.)

If there is no singing, the antiphon from the Sacramentary is recited by all, by some, by a reader, or by the priest. Otherwise, it may be incorporated into the priest’s opening remarks.
At their chairs the readers then participate attentively in the rest of the introductory rite.

Liturgy of the Word

Readings from Scripture and chants form the main part of this part of the Mass. The homily, creed and intercessions are expansions of it. The biblical proclamation and preaching is itself a sacramental act in which God speaks to his people and Christ is present among his disciples in His own word. Any kind of haste is avoided to encourage a spirit of recollection. Non-biblical texts are never substituted for the readings or psalms.

When the assembly sits, the reader of the first reading remains standing.

The priest may then, in a very few words, introduce the faithful to the liturgy of the word.

The reader then walks reverently to the ambo and begins the first reading from the Lectionary already placed there before Mass. If the priest has not made introductory comments, the reader waits until all are quietly seated before beginning the reading.

Whenever possible, someone other than the priest or deacon reads the lessons before the Gospel – ideally one reader for each lesson. Except for the proclamation of the Passion of the Lord, the readings may not be subdivided among several readers.

In the absence of any other reader, the deacon reads these texts. In the absence of even a deacon, a concelebrating priest, if present, proclaims these scriptural texts. When no other competent minister is present, the presiding priest read the lessons. This should be the exception rather than the rule.

The readers are to speak in a way that is audible, clear and intelligible. On more solemn occasions, the text may be sung – as long as the singing corresponds to the nature of the text and serves to bring out the sense of the words rather than obscure them.

An acclamation follows each of the readings: “The word of the Lord/Thanks be to God.” This is a way for the people to honor the word of God, receiving it with grateful hearts. This acclamation may be sung – even if the text of scripture is not sung. In fact, when required, someone other than the reader may lead this sung acclamation.

A brief period of silence is then observed so that the Word of God might be taken into the hearts of the people by the fostering of the Holy Spirit.

The psalmist (cantor of the psalm) leads the sung responsorial psalm – which is ideally sung. This should be done at the ambo. When the psalm cannot be sung a reader in a meditative style leads it. Even then, when possible, the people should sing the response. Otherwise it is recited.

The “responsorial style” is preferred. However, the psalm may also be sung straight through – without a response – by the psalmist or by all.

Only texts approved by the United States Conference of Catholic Bishops may be used. Other songs or hymns are not permissible.

When there is a second reading, the reader goes to the ambo when the psalm is concluded. The text is then proclaimed as described above.

The proclamation of the Gospel is the high point of the liturgy of the word – set off by special marks of honor in posture, an ordained ministers and a procession. At this point in the celebration Christ Himself is proclaimed – and usually heard in His own words – through the text of the Gospel.

This celebration is particularly apparent when the Book of Gospels is used. The altar represents Christ – and the book is placed there at the beginning of the Mass. In a sense, the word and sacrifice of Christ are visually joined, and Christ is presiding from His altar-throne. For the Gospel, all stand and welcome Christ as the Book of the Gospels is joyfully carried in procession to the ambo so that His Good News may be heard.

All stand for the acclamation – the “Alleluia” or Lenten acclamation. The acclamation itself must be sung – and sung by all. Other choices are available when there is only one reading before the Gospel.

All turn to face the ambo for the proclamation of the Gospel.

Homily and Profession of Faith

The homily is required on Sundays and holy days of obligation. It is recommended on other days as well, especially on the weekdays of Advent, Lent and Easter and other festive days. The readers sit and listen attentively during the homily.

When the norms call for it, all recite or sing the profession of faith. Having heard the Word of God, the assembly recalls and confirms the great mysteries of faith before celebrating them in the Eucharist.

All stand for the profession of faith. At the words, “by the power of the Holy Spirit…became man,” all make a deep bow. On the solemnities of the Annunciation of the Lord and Christmas all kneel for these words.

In the intercessions, the people respond to the Word of God and exercise the office of their baptismal priesthood, offering prayers to God for the salvation of all.

All stand for these intercessions.

The priest directs the intercessions, normally from the chair.

The deacon, cantor, reader or other member of the faithful announces the intentions.

The entire intercession or even just the assembly’s response is fittingly sung.

The intentions are to be sober, composed of few words and express the needs of the entire community.

The response of the faithful is a most significant element; it should be easily repeated by all.

It is also possible that the people simply pray briefly in silence after each intercessory statement.

There is a general sequence of the intentions: for the needs of the Church; for civil authorities and the salvation of the whole world; for those oppressed by any need; for the local community.

In special celebrations like confirmation, marriage, funeral, the prayers will refer more particularly to the occasion – keeping in view the wider world for which the Church intercedes.

Liturgy of the Eucharist

After hearing and celebrating the word of God, the Church begins the Liturgy of the Eucharist with open hearts.

The readers participate in this liturgy with exemplary devotion. They may remain at their chairs in the sanctuary or, if it is the custom of the parish, to take another place in the assembly.

The readers, if they remain in the sanctuary, may be offered Communion under both kinds even if this option is not offered to all in the assembly.

If there is no singing during the Communion procession, the Communion antiphon from the Sacramentary may be recited by everyone, by a small group of the faithful, or by a reader.

Otherwise, the priest himself reads it after his own Communion and before he distributes Communion to the faithful.

The readers may join in the recessional.

If this is the case:

After the priest (and deacon) kiss the altar, they – along with the readers and other ministers – make a profound bow to the altar.

If the tabernacle is located in the sanctuary, the priest and ministers also genuflect to the Blessed Sacrament before leaving the sanctuary as at the entrance.

The procession to the sacristy follows the same order as the entrance procession except that neither the Book of Gospels is carried nor is the Lectionary carried.