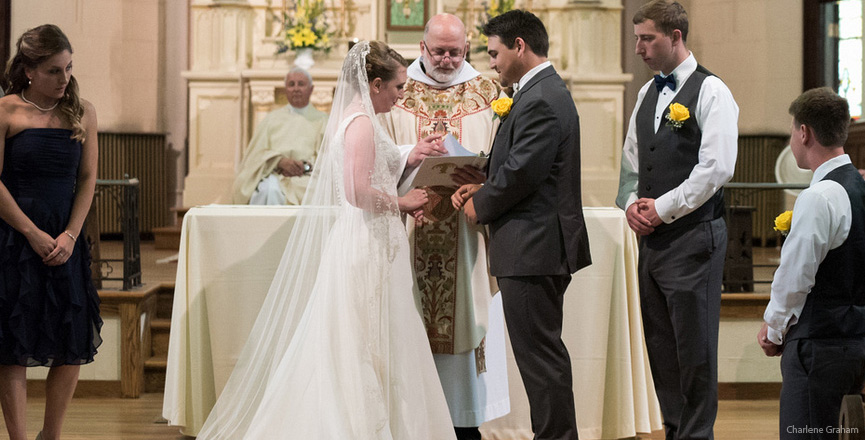 "When a man and woman celebrate the Sacrament of Matrimony, God as it were “is mirrored” in them; he impresses in them his own features and the indelible character of his love. Marriage is the icon of God’s love for us."
~Pope Francis, General Audience, April 2, 2014

Marriage, as instituted by God, is a faithful, exclusive, lifelong union of a man and a woman joined in an intimate community of life and love. They commit themselves completely to each other and to the wondrous responsibility of bringing children into the world and caring for them. Marriage comes from the loving hand of God who fashioned both male and female in the divine image (see Gn 1:27). A man "leaves his father and mother and clings to his wife, and the two of them become one body" (Gn 2:24). The man recognizes the woman as "bone of my bones and flesh of my flesh" (Gn 2:23). God blesses the man and woman and commands them to "be fertile and multiply" (Gn 1:28). Jesus reiterates these teachings from Genesis, saying, "But from the beginning of creation, 'God made them male and female. For this reason a man shall leave his father and mother [and be joined to his wife], and the two shall become one flesh'" (Mk 10:6-8).

These biblical passages help us to appreciate God's plan for marriage. It is an intimate union in which the spouses give themselves, as equal persons, completely and lovingly to one another. By their mutual gift of self, they cooperate with God in bringing children to life and in caring for them. Marriage is not simply a personal commitment between two people who love one another or a personal preference.

Marriage is both a natural institution and a sacred union because it is rooted in the divine plan for creation. In addition, the Church teaches that the valid marriage of baptized Christians is a sacrament—a saving reality. Jesus Christ made marriage a symbol of his love for his Church (see Eph 5:25-33). This means that a sacramental marriage lets the world see, in human terms, something of the faithful, creative, abundant, and self-emptying love of Christ. A true marriage in the Lord with his grace will bring the spouses to holiness. Their love, manifested in fidelity, passion, fertility, generosity, sacrifice, forgiveness, and healing, makes known God's love in their family, communities, and society. This Christian meaning confirms and strengthens the human value of a marital union (see CCC, nos. 1612-1617; 1641-1642).

Doesn’t the Church believe that those with same sex attraction have a right to happiness?

How has the US Supreme Court decision affected Church teaching on marriage?

Are those who disagree with the Church’s understanding of marriage welcome in the Church?

How will the US Supreme Court decision affect Church ministries?

What can or should we do as a result of this decision?

Where can I learn more about Church teaching on marriage?

No. The starting point for any discussion about the Catholic Church’s position on same sex marriage is that every person is worthy of respect and has intrinsic dignity—a dignity that can never be taken away. But a union between two people of the same gender is not the same as a marriage between one man and one woman, and treating different things differently is not “unjust discrimination.” As Catholics, we believe that one man and one woman are essential to marriage because of their differences—the difference is the difference, and true union is only possible in and through their differences. We believe that there is no other form of relationship between persons that can be considered equivalent to a natural relationship between a man and a woman out of whose love it is possible for children to be born and reared by both a mother and a father. Even when a husband and wife do not conceive a child (for example, due to infertility or age), their sexual acts are still of the kind by which children naturally are conceived. In contrast, two persons of the same sex cannot unite in such a way that a child is conceived.

Doesn’t the Church believe that those with same sex attraction have a right to happiness?

Yes, of course. The Church firmly holds that all persons are loved by our compassionate God and deserve the respect and dignity that is inherently theirs as human beings. In disagreeing that marriage can be redefined to include persons of the same gender, we do not wish to undermine their pursuit of happiness but only to preserve and defend the gift of marriage as divinely revealed in Sacred Scripture and in natural law.

How has the US Supreme Court decision affected Church teaching on marriage?

The Supreme Court ruling has not affected Church teaching on marriage. We will continue to share our consistent witness to the truth about marriage in a manner that respects the dignity of every person, and we will continue to act to protect our ministries and deeply-held values as the national discussion on this issue unfolds.

Are those who disagree with the Church’s understanding of marriage welcome in the Church?

How will the US Supreme Court decision affect Church ministries?

The US Supreme Court decision in Obergefell v. Hodges affirmed the freedom of religious organizations to continue to express and teach the truth of marriage. We hope and pray that the courts and civil governmental bodies continue to recognize that the Church has the right not only to speak about our faith in our churches, but also to express our beliefs in the public square and to be true to our Catholic identity by engaging in practices that are consistent with our beliefs.

What can or should we do as a result of this decision?

As Catholics, we have an obligation to continue to learn and grow in our faith so that we can share our faith. We should become better informed about Church teaching on marriage and its roots in the Gospel so that we can articulate and explain to others in a respectful manner what the Church teaches and why. In sharing our views, we do not seek to impose them on others, but we ask that others respect our right to express them and to become part of the national discussion on the issues. As citizens, we must also vote, and with civility and charity, we must make our voices heard in the political process to protect our ministries, our beliefs, and our values.

Where can I learn more about Church teaching on marriage?

The Diocese of Manchester offers the following resources to better understand Catholic teaching on marriage:

"Marriage: Love and Live in the Divine Plan" – a Pastoral Letter of the United States Conference of Catholic Bishops (USCCB) (2009) - English | Español

Additional Resources from the USCCB on Church Teaching on Marriage

Between a Man and a Woman: Questions and Answers About Marriage and Same-Sex Unions

Ministry to Persons with a Homosexual Inclination: Guidelines for Pastoral Care – English | Español

Defense in Support of Marriage