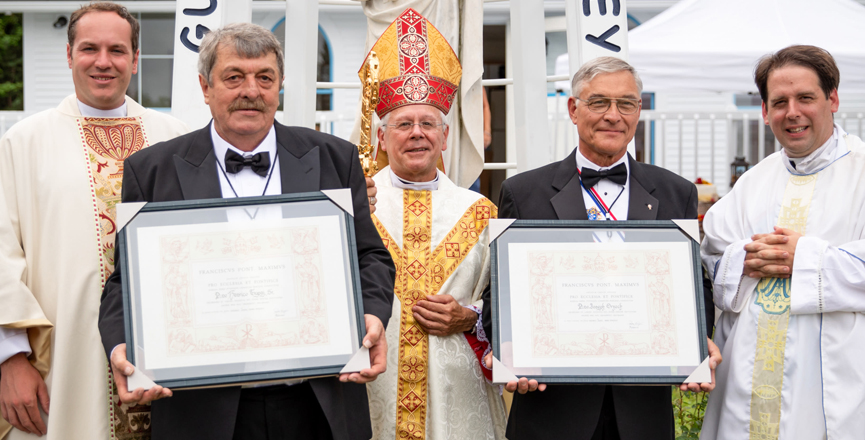 On Sunday, August 12, the community gathered at Gate of Heaven Parish in Lancaster, NH to celebrate the rededication of the Our Lady of the Mountains Shrine in Bretton Woods as well as the conferring of Papal Honors on two lay men. Pope Francis conferred the Pro Ecclesia et Pontifice Medal upon Mr. Joseph Orzech and Mr. Henry Tupaj, Sr. after Bishop Libasci nominated the two men earlier this year, in recognition of their exemplary personal character and extraordinary service to the Diocese of Manchester. In particular, their tireless efforts to renovate Our Lady of the Mountains Shrine.

Mr. Henry Tupaj, Sr. was born in Nisko, Poland and immigrated to the United States from Poland as a teenager.  Mr. Tupaj is a dedicated parishioner of Gate of Heaven Parish in Lancaster, N.H. where he volunteers repairing parish buildings, serving at Mass and working steadfastly as a member of the Knights of Columbus.

Mr. Joseph Orzech was born in Brooklyn, New York, served our country as an Air Force Pilot and then as a Delta Airlines Pilot.  Mr.Orzech retired to New Hampshire and settled in Dalton.  He is a dedicated member of Gate of Heaven Parish in Lancaster where he is a volunteer, leads retreats and serves others through the Knights of Columbus.

These two men, united in retirement in the North Country of New Hampshire, were brought together by their pastor to rebuild a shrine, neglected and long forgotten.  The article and pictures in the story told in Parable Magazine is the true story of faith of these two men.  It documents their tireless dedication to fulfill a vision that honors our Blessed Mother, and will inspire pilgrims for generations to come.

Father Matthew Mason, the previous pastor of Gate of Heaven Parish, stated in a letter: “Since 2013, Mr. Orzech and Mr. Tupaj have volunteered in excess of 6,000 hours, giving of their construction and woodworking talents.  The church has now been completely repaired both inside and out and will be able to continue to welcome visitors to the mountains of northern New Hampshire for prayer and worship.”

The Pro Ecclesia et Pontifice (“For Church and Pontiff”) Medal is an award conferred by the Pope for long and distinguished service to the Church.  It can be bestowed to either clergy or laity, and is the highest medal that can be awarded to lay people by the Pope.

See a selection of photos from our day. Click on the images to see them enlarged. All photos are courtesy of Bill Rutherford and Northern Lights Studio.