Home » About » Who We Are » Leadership » Retired Bishops 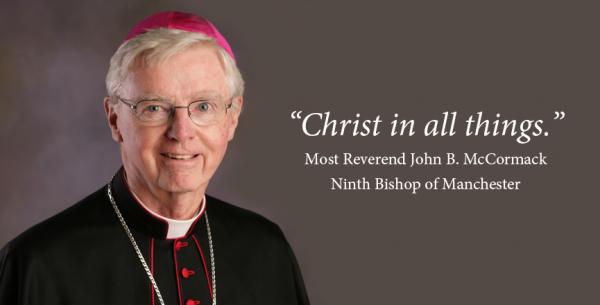 John McCormack was born on August 12, 1935 in Winthrop, MA. After attending multiple schools, he was ordained in Boston on February 2, 1960. He served as associate pastor at St. James Parish in Salem, MA, then was appointed executive director of North Shore Catholic Charities Center in Peabody, MA in 1967. After serving as pastor of Immaculate Conception Parish in Malden-Medford, MA for four years, Father McCormack was appointed Auxiliary Bishop of Boston in 1995.

On July 21, 1998, the late Saint Pope John Paul II appointed Bishop McCormack the ninth Bishop of Manchester. During his episcopacy, Bishop McCormack built twelve new churches, though the number of parishes declined from 130 to 90. He also established multiple programs, restored St. Joseph Cathedral in Manchester and dealt with the aftermath of the sexual abuse crisis. He enjoyed frequently visiting schools and parishes.

Bishop Francis Joseph Christian was born October 8, 1942 in Peterborough, NH, the only child of the late Joseph L. and Dorothy M. Christian. He attended Jaffrey public schools and is a 1960 graduate of Conant High School.

Bishop Christian studied at Saint Anselm College in Manchester for two years, before entering the seminary in 1962. He studied at Saint Paul Seminary in Ottawa from 1962 to 1964 and completed his undergraduate study with a B.A. and a B.Ph. from the University of Ottawa, in 1964. He studied at the American College at the University of Louvain in Belgium from 1964 to 1968, earning a master’s degree in theology in 1968.

Bishop Christian was appointed assistant chancellor of the Diocese of Manchester in March 1975, and was made chancellor in June 1977. Pope John Paul II named Bishop Christian a prelate of honor, which includes the title "Monsignor," in 1986.

Bishop Christian retired as Auxiliary Bishop of Manchester on February 1, 2018.