On Call with Dr. Pepe

It was 1961 when my mother was screaming the name Joseph repeatedly while she was in labor at St. Margaret’s in Boston. After she delivered, the obstetrician went to tell my father the great news. He introduced himself, and called my father Joseph. My father said his name was Pasquale, not Joseph. My father told me later that the doctor was awkwardly embarrassed that my mother was calling out another man’s name until he told the obstetrician that she often called on St. Joseph in times of pain and stress. Up until then, my parents hadn’t decided on my name. While I’ll never live up to St. Joseph, it’s nice to shoot for such a high bar!

The month of March is dedicated to St. Joseph. Joseph was the husband of the Blessed Virgin Mary and the foster father of Jesus. St. Joseph is invoked as patron for many causes. He is the patron of the universal Church. He is the patron of the dying because Jesus and Mary were at his deathbed. He is also the patron of fathers and workers. In some communities, it is traditional to wear red clothing and eat a Neapolitan pastry, known as a zeppola, on St. Joseph's Day, which is March 19. Everything Italian seems to boil down to food in some way, shape or form. I, myself, am a foodie. I relish any chance I have to enjoy an Italian pastry. (I prefer cannoli.)

St. Joseph is also the patron saint of Sicily, and many Italian-American communities give thanks to him for preventing famine, so giving food to the needy is also a common St. Joseph's Day custom. But of course, hunger and food insecurity are problems that many people face all year long.

That’s why, at Catholic Medical Center, we recently opened a Preventative Food Pantry for our patients with help from Catholic Charities New Hampshire’s NH Food Bank and the Parish of the Transfiguration in Manchester. The genesis for the Preventative Food Pantry grew out of a conversation I had with NH Food Bank Executive Director Eileen Liponis in late 2017. Eileen heard about Boston Medical Center’s Preventative Food Pantry, which opened in 2001 with the purpose of addressing nutrition-related illness and helping undernourished, low-income patients. Patients are referred by their primary care providers, who write a “prescription” for supplemental foods that best promote physical health, prevent future illness and facilitate recovery.

This idea really resonated with me given the challenges I saw my patients face when I was a primary care physician: patients struggled with food insecurity and dietary restrictions related to illnesses like diabetes and congestive heart failure.

While we at CMC were eager to start our own Preventative Food Pantry, we didn’t have the space to do it alone. A natural partner was the Parish of the Transfiguration, which already had a food pantry. A grant from the Bishop’s Charitable Assistance Fund and the generosity of CMC’s employee giving campaign enabled us to buy a new refrigerator and freezer to meet increasing food storage needs.

We opened our doors in January 2019 and served over 60 CMC patients and their families in the first year. Our prescriptions nearly doubled during the last three months of 2019. We anticipate that 2020 will prove to be a year when even more of our patients will get the foods they need to live healthier lives.

St. Joseph is truly smiling down upon us as we meet the nutritional needs of our patients!

Dr. Joseph Pepe is the president and CEO of CMC Healthcare System: Catholic Medical Center, New England Heart & Vascular Institute, and several subsidiaries. He and his wife reside in Manchester. 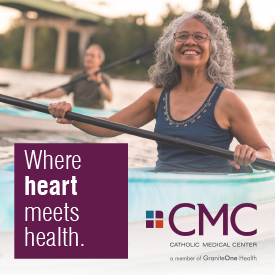