New Generation is a home that rarely has a vacancy. Offering meaningful and lasting help to mothers and children experiencing homelessness since its founding in 1987, the shelter in Greenland, New Hampshire, provides much more than temporary housing.

Through the years, it has helped over 2,000 women find permanent housing, independence and dignity. All the while, there have been two constants: a steady increase in the services New Generation provides and a matching increase in the need for those services. As Executive Director Elsy Cipriani describes it, “The worst days are when we get a call from someone in need and we simply do not have the space to bring in a mother and her child who are experiencing homelessness.”

Founded by the late Ruthie Ford, in whose honor the Bishop’s annual Vita et Caritas award is presented, New Generation became part of Catholic Charities New Hampshire (CCNH) in 2021. Since then, says Elsy, they have been able to focus more exclusively on the mission Ruthie envisioned.

She describes, for example, CCNH’s assistance with accounting details, as well as marketing and development efforts, including grant writing.

This has allowed Elsy and her staff to focus their energy on the services they provide to the mothers and children in their care. “We still feel the independence we have had of running the programs on our own, but we benefit from Catholic Charities’ wide range of support.” For example, she says, with CCNH helping to tell New Generation’s story and showcase its work, she and her staff are able to show these stories, not just to potential supporters, but to their residents, who can see the successes of the people that have come before them. “Those stories,” Elsy says, “really offer them hope.”

Since the onset of the pandemic, when recruiting and retaining staff has been especially difficult, Elsy says the assistance from CCNH has been crucial. “We don’t have to be as concerned with human resources. Catholic Charities has taken care of that, and it has alleviated a big challenge so we can focus on the work we do.”
A mainstay of New Generation has been the Thrift Shop they operate. “The Thrift Shop has benefited from a very generous community,” Elsy says. “We receive quality items, and the increase in customers and sales really supports our mission.” With the current favorable job market, and with the assistance provided by New Generation staff, Elsy notes that “60% of residents have been able to come to the shelter and find work within a few weeks.”

Another new development since 2021 is that New Generation now has a full-time staff member focused exclusively on aftercare services for women who have moved out of the shelter. “Someone now checks in with aftercare families regularly, maybe every other week or once a month, making sure they still have what they need, so they can stay in permanent housing,” Elsy says, noting that the interactive database CCNH has set up allows them to track and report their successes more accurately. “Ninety percent of the people we are serving in our aftercare programs have been able to remain in their residence after leaving New Generation. That stability is very good.”

Residents, as well as those who have moved on from New Generation, are able to access the wrap-around holistic services provided by the various programs of CCNH, including parenting classes at Our Place. Additionally, someone from the New Hampshire Food Bank “comes in twice a month to teach healthy habits about food, nutrition and eating,” says Elsy, “and through Catholic Charities, we are also able to make sure that all residents have access to (Catholic Charities’s) Mental Health Counseling Services within three weeks.” New Generation has also implemented a more robust financial empowerment program in cooperation with the Consumer Financial Protection Bureau.

Those “worst days” of having to turn women and their children away still come several times each month, says Elsy. She and her staff are considering ways to increase the space they can provide. Meanwhile, they celebrate “the best days” at New Generation. That, Elsy says, “is when we have one of our families move out on their own into permanent housing. For a family that has experienced homelessness, this is really a joyful day!” 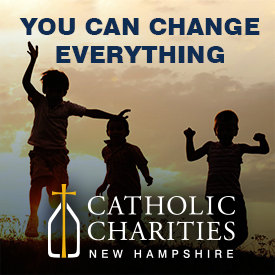