Rev. John B. Finnigan Called to His Rest 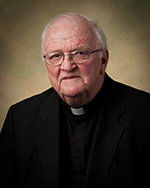 On Monday, June 7, 2021, the Reverend John B. Finnigan was called to his rest and to the glory of the Resurrection promised by the Lord. He was 91 years old.

Father Finnigan served as pastor of Mary, Mother of the Church Parish in Newton and Saint Mary Parish in Newmarket. In 2005 he retired from active ministry but continued to reside at Saint Mary Parish until spring of 2006 when he took up residence at Immaculate Conception Parish, Portsmouth. In more recent years he had been in residence at Saint John the Baptist Parish, Suncook where he provided parish ministry for Suncook and Holy Rosary Parish, Hooksett.

On Monday, June 14, 2021, the wake will be held at Pelczar Funeral Home and Crematory, 77 Exeter Road, (Route 108), Newmarket, New Hampshire from 3:00p.m. to 6:00p.m. with the Rite of Reception of the Body at Saint Mary Church, 182 Main Street in Newmarket at 6:15p.m., followed by the Mass of Jesus Christ Eternal High Priest at 6:30p.m. On Tuesday, June 15, 2021, at 11:00a.m. The Most Reverend Peter A. Libasci, Bishop of Manchester, will preside at a Mass of Christian Burial. The Rite of Committal will be celebrated after the Mass at Calvary Cemetery in Newmarket, New Hampshire. The Kent and Pelczar Funeral Home of Newmarket, New Hampshire has care of the arrangements.