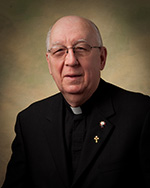 On Saturday, September 17, 2022, the Reverend Monsignor Eddy N. Bisson was called to his rest and to the glory of the Resurrection promised by the Lord. He was 82 years old.

Monsignor Bisson was a member of the Knights of Columbus in Franklin; Assistant Deanery Director of Youth Activities in the Laconia Deanery; Judge of the Matrimonial Tribunal; Chaplain of the Daniel Webster Council, Boy Scouts of America; Diocesan Director of Scouting; member of the Diocesan Vocation Board; Dean of the Lakes Region Deanery and Chaplain of the Msgr. Sliney Assembly of the Knights of Columbus. Monsignor Bisson was Inducted into the Knights of the Holy Sepulchre in 2009 and received the honor of Knight Commander of the Holy Sepulchre in 2014.

On Thursday, September 22, 2022, the Rite of Reception of the Body will take place at Saint Joseph Cathedral at 9:00 am in Manchester. Monsignor Bisson will lie in repose in the church from 9:00 am until the funeral Mass. The Most Reverend Peter A. Libasci, Bishop of Manchester, will celebrate the Mass of Christian Burial at Saint Joseph Cathedral, Manchester at 11:00 am. The Rite of Committal will take place at Mount Calvary Cemetery in Berlin, New Hampshire. The Lambert Funeral Home, 1799 Elm Street, Manchester, New Hampshire has care of the arrangements.

With faith and hope in eternal life, let us commend our brother to the love and mercy of God and assist him with our prayers. In keeping with Monsignor Bisson’s wishes in lieu of Mass requests or flowers, donations can be made to the Seminary Fund, the Clergy Fund or the Priests’ Retirement Fund of the Diocese of Manchester.