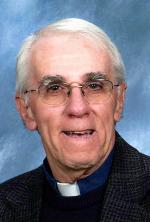 On Saturday, January 30, 2021, the Reverend Roger P. Bilodeau was called to his rest and to the glory of the Resurrection promised by the Lord, having received the prayerful support of the Faithful and the consolation of the Sacraments. He was 85 years old.

Father Bilodeau served as Chaplain for the NH Department Catholic War Vets and the Lincoln Police Department; Diocesan Personnel Board; Diocesan Matrimonial Court Judge; Priest Senator for the Concord Deanery; Council of Priests for the Nashua Deanery; Dean of Laconia Deanery, Franconia Deanery, and White Mountain Deanery; Trustee for the Holy Trinity Endowment Fund; and was the confessor to the Sisters of the Precious Blood.

Father Bilodeau is survived by his niece Denyse Chabot.

Calling hours are Thursday, February 4, 2021 from 4:00p.m. until 7:00p.m. at the Lambert Funeral Home at 1799 Elm Street, Manchester, New Hampshire. The Mass of Christ the High Priest will be offered at St. Joseph Cathedral, Thursday, evening at 7:15p.m. The Most Reverend Peter A. Libasci, Bishop of Manchester, will preside at a Mass of Christian Burial at St. Joseph Cathedral, 145 Lowell Street, Manchester, N.H., Friday, February 5, 2021 at 10:00 a.m. The Rite of Committal will take place after the Mass at Mount Calvary Cemetery in Manchester, New Hampshire.